How to make sour dough

On the weekend I taught a group of people how I make sour dough.  This is the second time I've shown people what I do.  The first group have all gone on to continue making their bread.

I'm not a great teacher.  In fact, if you've only met me in this space, you may not realise it but I'm a terrible speaker in public.  But I wanted to be part of this.  A farm blitz with a workshop component so participants take home useful skills!  Great idea!!

For ages I've been thinking I should post about sour dough making and now I think the time is right.  Hopefully I can explain it clearly in writing.

The first thing I need to tell you is that sour dough bread is a process rather than a precise recipe but do not be put off by this.  It is the easiest bread I've ever made.  Just follow my instructions below and you will fall in love with the resulting bread.

The easiest way for me to teach you is just to show you exactly what I did in my kitchen today.  I had seven and a half cups of sponge (I'll tell you how to make the sponge in a minute).  The sponge should get past the frothy stage and start to look bubbly like mine is in the middle. Then it's ready to use.  I could have even let it get bubblier than this mix. 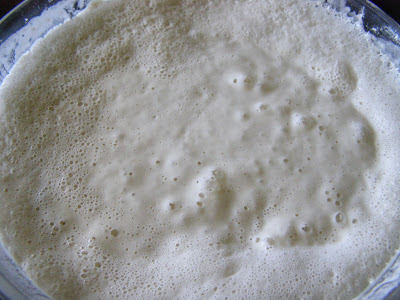 Making the bread
I made two loaves today so I put seven cups of sponge into a bowl and mixed in two tablespoons of oil, two tablespoons of sugar and two teaspoons of salt.  If you only want one loaf then halve the amount.  Then I put the remaining half cup of sponge into my pot (not with airtight lid).  This will be your new starter.  NEVER forget this step or you will have no starter. 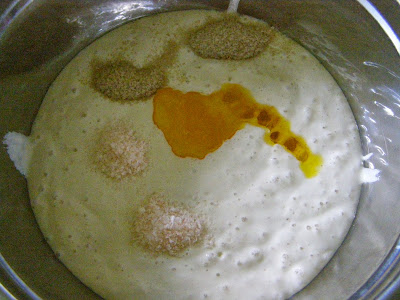 I added one cup of flour and one cup of water to the starter in the pot to build it up again because I'm making more bread tomorrow.  If I wasn't going to make bread for a couple of days I wouldn't have added any flour or water because it was just fed when I made the sponge.  You just put the pot aside on the bench. 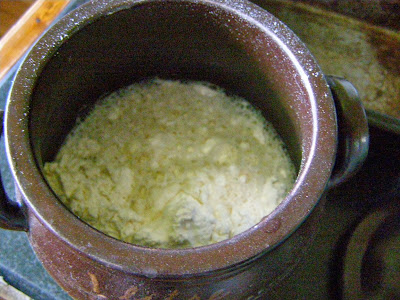 To my bowl of sponge, oil, sugar and water, I just added flour until it was the right consistency to knead (see picture below). 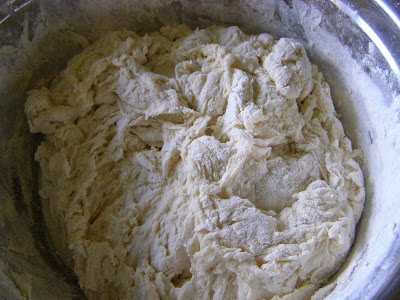 Knead your bread for a couple of minutes.  Sour dough doesn't need anywhere near as much kneading as yeast bread.  When you knead, make sure you aren't pushing down on the dough but just sort of stretch it forward, turn, stretch forward, turn.  When it's ready you'll know.  During the kneading, let go of your dough.  If it moves and it bounces back into shape - it's ready.  Shape it into a rough cigar shape and place in an oiled tin. 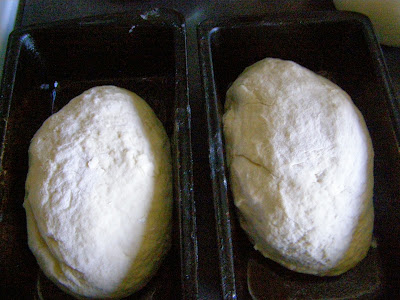 Cover with a clean tea towel and leave until it doubles in size.  Today this took about six hours. 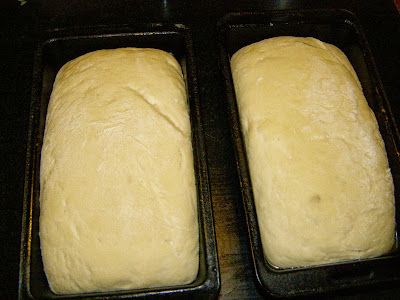 Slash the top of the bread from one side across to the other in whatever pattern you'd like (I forgot) and put it into the oven.  I bake at 180c but I think most recipes recommend hotter than this.

Bake the loaves (or loaf if you're only making one) for about forty minutes.  You'll know when it's cooked by tipping it out of the tin and rapping it with your knuckles.  It sounds hollow then it's done.  If not, or if you're not sure, chuck it back in the oven.  Cooking it longer will just make the crust very crunchy.  It won't overcook the bread. 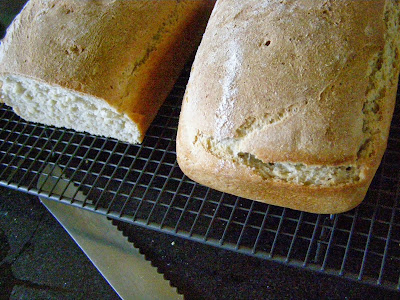 The aroma of the baking bread is divine, as is the flavour.

Now for all the nitty gritty tips -
The sponge

A sponge is the term for the mix you prepare from the starter when you want to make some bread.  To make the sponge you need to add the same amount of flour and water as there is starter.  So if  I have two cups of starter, I would add 2 cups of flour and 2 cups of water to make the sponge.  You leave it until it's bubbly and then make your bread.  You don't need to panic about getting back to it at exactly the right time.  It will be ready for several hours.  I generally make it at night so that it's ready to go in the morning sometime.

Because sour dough needs to be kept active, it needs to be fed.  To feed the starter just put half the flour and water to starter.  If you have half a cup of starter, add a quarter cup of flour and a quarter cup of water.  The reason is that you don't want to waste your flour if you're not making bread with it.  You just want to keep it active.  Obviously if you don't make a loaf with it and you keep adding by feeding it, you will end up with more starter.  Therefore, when you have all the starter you want, just tip half out before adding your flour and water so that you don't end up with a giant amount.

If you don't plan to make bread for a few days or weeks, put your starter in the fridge.  It will be fine in there for quite a while.  It will separate and have a liquid on the top.  I just stir it back in and then add flour and water and put it back on the bench when I'm ready to bake again.  Some people choose to pour it off for a milder flavoured bread.  The starter has a good sour, fermenty smell.  It doesn't smell off.

I wash my pot whenever I make bread before putting the starter back in.

Sour dough is kind and forgiving.  Please, even if my description sounds overwhelming, just try it.  It will make so much more sense when you are actually doing it.

I am assuming in this post that you can get some starter from someone.  If not, google it.  Mine was given to me and I don't know this step in the process.

Oh, and you're not supposed to cut a loaf until it cools but I couldn't care less.  Straight from the oven, when it's hot, tasty and aromatic, I spread it with plenty of butter and ENJOY!

Good luck with your bread making!  Following are some photos of this week's workshop.

Email ThisBlogThis!Share to TwitterShare to FacebookShare to Pinterest
Labels: Community, Gardening, How To, Real Food, Recipes

Thanks for the clear instructions. I have a day off soon, I might even try making sourdough.

Oh my gosh I would love to bake some bread in an oven like that! I tried making my own starter once and something went wrong and I have not been game to try again.

I got my started stared by combining a cup of unbleached flour, a cup of water, 1 teaspoon of sugar, and 1/4 teaspoon of yeast. left it covered with a damp cloth on the counter for a couple of days and have been using it for years.

Looks like great instructions for a beginner. My friend and I have been talking about making some sourdough bread and she is making her first starter at the moment. Regards Kathy A, Brisbane, Australia

Thanks for your comments. Patty, sounds like making the starter is as easy as the bread.

I would love feedback from all of you if you do use my instructions. I'd like to know if I've explained it well enough for people to have success.

Hi Barb, for some reason your comment didn't show up here even though it appeared in my emails. I'd be happy to show you how to make sour dough one day if you like. Do you make your own bread already? Let me know.

I would like to try Sourdough Rye bread, have you had any problems with this or do I just substitute RYE flour for white ?
I have made quite a few loaves with white unbleached organic flour and wondered if I could just increase the Rye and decrease the white until it was mostly Rye but still not too dense.

Hi Margaret, I haven't made rye bread but another lady made all rye at the bread making day and while it was heavier, it was very nice. Just play with it until you achieve a loaf you're happy with. You'll have fun trying it out anyway and the results will all be edible!

Find me on Face Book

People I love to visit